The tourists are far and few between, but we still have hundreds of visitors on our beach, and I encourage you to spy on them with binoculars. I’m talking about our wintering shorebirds, of course! Each winter dozens of species travel down the east coast, coming from the Midwest, New England, and even the Canadian arctic tundra. After spending the summers nesting on beaches and prairies up north, they depend on southern beaches offering food and privacy for survival until it’s time to go home to breed again. Fripp Island is part of an Audubon Global Important Bird Area as it is proven to be a perfect host to these imperiled birds. Many shorebird species are in decline, and some are top priorities for shorebird biologists. 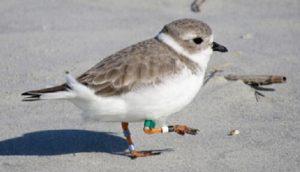 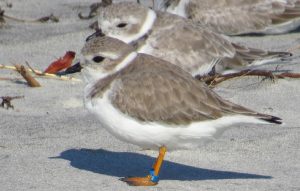 The Piping Plover is listed as endangered in Canada and along the Great Lakes and threatened in the Great Plains and northeast. Biologists are tracking their populations and migrations by banding their legs and hoping someone reports seeing them somewhere. This is how I came to know “Dakota” and “173”, as I call them.  Over the past five winters reporting her, I’ve learned that Dakota hatched in South Dakota in 2008 and returns there each year to lay her eggs. Some of her chicks, also banded, have shown up wintering on Texas beaches! Newer to the Fripp flock is 173, who hatched in 2016 on Wasaga Beach, Ontario, Canada. How these tiny 2oz birds can fly 1300+ miles knowing exactly where to go year after year completely amazes me!

The best way to help Piping Plovers and all the other shorebirds is to give them plenty of space. Each time they are scarred by a dog chasing them or a person walking through the flock, they fly and waste valuable energy. Remember, these tiny birds are here from over a thousand miles away and they will have to fly back. The shorebirds are just one of the many species that makes nature on Fripp so enjoyable, and I’m so happy we can share our beach with these little guys!  Remember to call the Activity Center to book a naturalist-guided beach birding trip!

173 is part of the threatened Great Lakes population. His beach had a record 5 nests that year.

Dakota is part of the threatened Great Plains population and was banded by the Virginia Tech Shorebird Program.