On February 13th our Naturalist team took a day trip Savannah to tour the Ocearch research vessel. Ocearch is a non-profit organization built to help scientists gather data about sharks. With their creation in 2007, Ocearch has tagged 416 individual animals on 34 separate research cruises. The data they have collected is helping scientists better understand sharks with topics including movement patterns, habitat use, reproductive style, and dietary needs.

The most recent expedition, NASFA 2020, concluded on February 11th in Savannah where our naturalist team met up with the crew. While there, our naturalists were able to go on an in-depth tour of the research vessel. There tour including gear storage, the science lab, the one of a kind shark lift, and the helm. The programs coordinator of Ocearch showed them SPOT tags along with gear that is used to bring sharks onto the ship for tagging and research. Our naturalist team hopes to use some of the information and skills they learned to improve our new Shark Tagging Research project!

Here’s what they Learned: 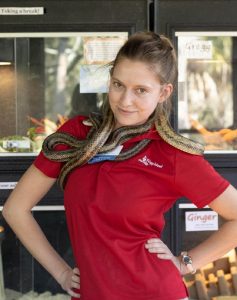 Krista Schmidt is from San Diego, California. She graduated from the University of California of Davis with a degree in Wildlife and Fisheries in June of 2019. Krista hopes to hit every realm of wildlife that she can with her internship at Fripp.

What Krista learned at Ocearch: 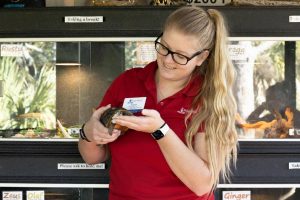 Kristina Flanigan is from Cincinnati, Ohio. She is graduating this May from Bowling Green State University with a degree in Marine Biology and Environmental Science. Kristina has been to Fripp one time before and had recognized the name while researching internships. She knew that she would enjoy her time here and also appreciated that the internship offers a research component that will help her get into graduate school.

What Kristina Learned at Ocearch: 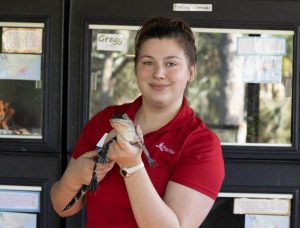 Kaylee Lyon  is from Goldsboro, North Carolina. She attended the Unity College of Maine and graduated this past December, majoring in biology with a minor in ecology. Kaylee is searching for the path that she wants to take with biology. She chose Fripp because of the different opportunities we have to offer!

What Kaylee learned at Ocearch: